I began taking photographs of aircraft in 1969 at the Air Show of the Netherlands Airforce, Soesterberg Air Force Base. Those days the Delta Dagger was still active. Since that time the ” aviation photography virus ” has infected me.

To feed my passion for aviation, I began visiting airfields all over Holland by bicycle. Later, as an employee of KLM, I was able to trade my Dutch-bike for my favorite mode of transportation and flew all over the world seeking out airplanes of the world.

I worked for the ATC division of the Dutch Air Force from 1974 to 1980 and was afforded the opportunity to fly in a number of different military and civil aircraft. Types like the Lockheed Neptune, C-47, C-54, C-118, C-131, Albatross, Twin Pioneer, Antonov 2 and C-130 Hercules are on my list and more to come. 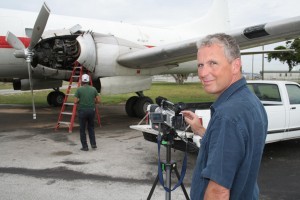 Me filming at opa locka.

I began documenting the aircraft sought out on my adventures around the world by making video films. To my astonishment many airplane enthusiasts began requesting copies of my films. Today the result is that I have compiled a comprehensive library of video films (and photographs) featuring a diverse and interesting array of airplanes.

To all fellow aircraft enthusiasts out there!

I love to share my passion with others and welcome your questions. Please feel free to send an e-mail to APVW; I will be delighted to share the insight and experiences I have acquired through years of airplane watching! 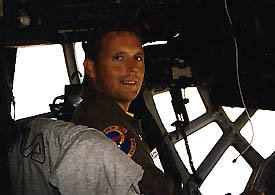 As ” navigator ” on board an Ilyushin 76 of the Ukranian Air Force.